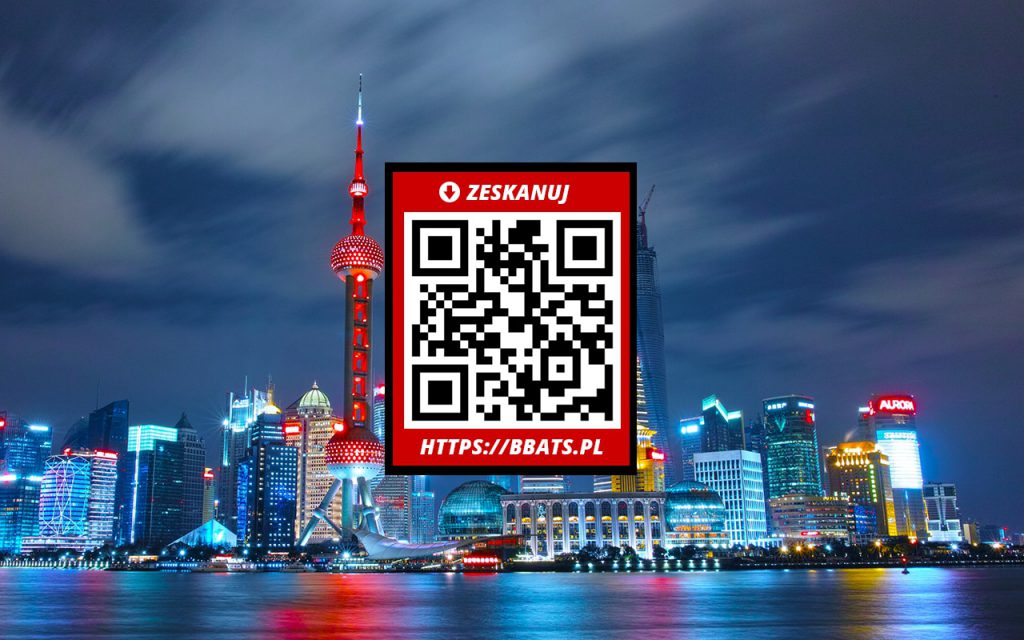 China is one of the most powerful economies in the world for a reason. They are a key strategic partner for most European countries, they are leaders in development and digitization, they have a powerful industry and the commercial sector. Handling connections with China, both passenger and freight, is now a key task of many Polish forwarding companies. However, in this article we will focus on something different than usual. We will not talk about transports, forwarding, specialized and oversized transport … Well, at least not too much. Today we will look at the phenomenon that occurs in this amazing, technologically developed country. The subject of today’s article is QR codes in China.

QR CODES IN CHINA. WHAT ARE QR CODES?

Although not everyone knows about it, everyone has already met with QR codes. They operate on advertising media, applications or public information systems. What exactly is a QR code?

As a graphic character, it encodes Chinese and Japanese, Arabic, Hebrew, Greek, Latin and Cyrillic alphabet characters. At the same time, the user can encode any other character in this technology, such as the French card deck type of spades: ♠. The code can be read by using a special scanner that recognizes the pattern contained in the code. Scanners do not need much time to read the encoded message, which is why QR codes are often placed on mobile media. They are used in the transport industry (e.g. in identifying courier parcels), advertising (e.g. as a link to the page of the advertised product), or information (e.g. as an extension of the printed article). The use of QR codes for making payments, money transfers or gaining access to detailed personal data is also becoming more and more common.

HOW ARE QR CODES SUPPORTED?

QR codes can be read using specialized scanners (e.g. in the TSL industry, where it is primarily about recognizing logistic data) or mobile applications. Developers of mobile applications offer applications that work in every available operating system (iOS, Android, Windows Phone, etc.), however, manufacturers usually themselves contain applications in their systems that enable QR decoding. At present, even the phone’s camera can often perform the function of a dedicated code recognition application. The code is read by recognizing the arrangement of squares. Squares can be dark (black) or light (white), and in larger numbers form code words that store information about individual characters.

QR CODES IN CHINA – A SOURCE OF POPULARITY

As we mentioned earlier, the QR code is a very universal method of data encoding. Allows you to encode many types of characters, including all Chinese characters. And there are quite a few: Hanzi (or Japanese kanji) consists of up to 50,000 characters! The ability to save them in the form of a small code means a significant saving of space, easier reading of the message and transfer of responsibility for displaying the message directly to the recipient. In addition, the last factor makes it easier to study how effective actions are and how popular the message transmitted by code is.

An additional factor affecting the popularity of QR codes in China is also their use by two technology giants. The use of QR codes by Tencent (the producer of the WeChat application) and Alibaba (Alipay – a wallet-like application) made their usability and use go up. By using codes, you can add friends, make payments and confirm the authenticity of products in these applications. After the codes were promoted by these two companies, real QR madness began in China. In 2020, the Chinese found applications for QR codes that our philosophers have never dreamed of.

QR CODES IN CHINA – THE MOST INTERESTING APPLICATIONS

The degree of technological development puts China, if not in the first place, at least on the podium of progress in the world. In the most developed regions of the country, cash and credit card payments have virtually been eliminated. To transfer money to your loved ones, all you need is to have them in your friends on WeChat. To buy coffee in an online cafe, you must first purchase it via the mobile application to pick it up on the spot.

Fun fact: WeChat can be used from anywhere in the world, but you need to be verified by someone who is already in the system to register. In addition, payments and money transfers are only available to users who have an account with a Chinese bank.

Transfers can be made to other users, but when it comes to paying for goods and services, QR codes come into play. Here are the most popular and in our opinion the most interesting uses of these codes in China (or at least those that we were able to confirm).

In Poland, many companies promote themselves by saying: like us on Facebook! By the way, they offer us a very unattractive link or a slightly simplified form that allows you to quickly search the portal. In China, meanwhile, the message „scan our code and follow our updates!” Dominates. Just scan the code to start tracking the brand, skipping the search, check and click the appropriate button. The codes appear not only on billboards and brochures, but also on websites and websites. Example: KLM airline QR code.

If you can use QR codes to track even airlines, why can’t you use them as a business card? You can! In China, this is a very popular way to share your data. This can be done, for example, using the already mentioned WeChat application – the personal description contains the desired information, and at the same time creates the ability to quickly „add to friends”. WeChat also plays a role similar to LinkedIn in China, which is why the QR code can be used in a business way. This is an attractive solution, all the more so as in the light of climate problems and ecological disasters in China, ecology is becoming increasingly important. Example: authentic QR code for the card of the author of this text. You can add him to friends, but he doesn’t come to WeChat regularly, so keeping in touch with him this way may not be very effective.

There are currently two wallet applications in China: Alipay and WeChat (which, as we wrote earlier, is also a messenger and will appear in this text several times). Alipay is an application that appeared in China in 2004 and is currently the largest mobile and online payment platform in the world. It gives users the ability to connect the application with a payment / credit card or virtual wallet. Payment is based on the user’s code being scanned by the seller’s reader. Similarly in the case of WeChat, where the generated user code is scanned. The messenger also allows the possibility of payment by scanning the seller code. Payments using the cited applications are not limited to the territory of China.

4. Connecting to wireless networks and logging into websites

I think everyone knows from the autopsy how difficult it can be to rewrite the password to the router or try to connect to the hotspot by selecting a million options, approving the code, authorization by email and the like. Using the QR code allows you to bypass these steps – connect directly to a wifi network or hotspot. In addition, some sites offer the option of logging into your account by scanning the code. This contributes to a significant saving of time, and thus to the convenience of users.

5. Facilitating life in a big city

City bikes are rented by scanning QR codes. This solution is also common in Polish city bike rental systems. An example could be, for example, Nextbike, with the Warsaw city bike Veturilo.
In some Chinese cities, plaques with a QR code can be found on poles, classifieds, lanterns and other urban equipment. They belong to the system of rapid reporting of damages and reservations – this way you can inform the relevant services that the lantern is not working, the trash bin is full or something bad is happening. They are also used for throwing and segregating rubbish.

Thanks to the waste segregation system, citizens can participate in the lottery. Properly segregated garbage gives „green points”, which in turn can be exchanged for discounts in individual stores and supermarkets. QR codes are also the basic method of rental and return in city bike rental systems.

In 2014, public health services conducted an experiment in many cities: selected seniors received special badges with QR codes containing basic information about their owners. In the event that they were lost while walking or missing, passers-by could scan their codes and escort them home. Badges were an additional convenience for the services, because they contained information needed by rescuers and doctors.

Over the past few years, China has become a leader in digitization, implementation of cashless transactions and information systems based on QR technology. They are used in China to transfer money, identify citizens, or maintain public order. The above list is exhaustive, but it does not present all the actual uses of QR codes. If after reading this article you see that we have forgotten something, let us know!